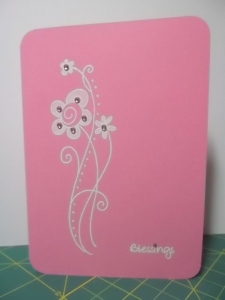 Does anyone else ever have one of those moments … the ones when you’ve got the mugs out, boiled the kettle, made the tea … and then wandered off into a parallel cardmaking universe, only to come to yourself half an hour later (when the tea is stewed), and realise what you were originally supposed to be doing?  Ho hum … hope I’m not the only one!  Got the tea eventually 🙂

Onto the Less is More Challenge, which Chrissie is (wo)manfully doing on her own at the moment … this week it’s a colour … pink.  Mmm, I thought, easy peasy nice quick card then … lots of feminine girly images came to mind … flowers, butterflies, birds … the choice is almost limitless.  There’s the rub, it was so not ‘easy peasy then’ at all … narrowing the field down to just one was the big challenge!  I finally did though, after a good deal of playing and  deliberation and decided on a change this time round … instead of having plenty of white space with pink added, I’ve gone for plenty of pink space with white added!

I stamped and embossed the image and sentiment, then did a little space filling with a white glaze pen, and finally added some pink bling to the flowers and the i.  You might just recognise the stamp (if you’ve visited before and had a meander around) … in a former (masked off) life, it appeared on my first ever LIM card in week 87 (goodness … only a few short weeks ago … doesn’t time fly at a pace in blog world?)

That’s it for now … need to get creative with ‘orange’ next, which is the new cue card at CASology (I’m waiting for an appropriate song to come to mind after Ardyth’s wonderfully fun challenge for One Layer Wednesday … it’s like having your own internal jukebox!)  Thanks for coming by, and especially so if you’ve had chance to make a comment.  A la prochaine … Anita