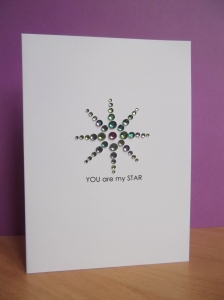 This is a supremely quick post and a supremely quick card!  I’m playing with CASology‘s cue card (Star) and Less is More‘s theme (Anniversary … not necessarily the word but suitable for the occasion).  I took my inspiration for the design from a gift tag I saw yesterday and it just developed from there … nice and simple, for that special someone who is truly a star.

I tend to doodle by eye, but setting this out demanded a bit more precision, so I measured it all and marked it with pencil dots … which are now underneath the gems!  Other than that, the sentiment is computer generated (Century Gothic … love the simplicity in comparison with the star).

This is what I used:  Cardstock: Docrafts,  Gems: Papermania

That’s it for now, I’ll be doing some challenge and blog travelling tomorrow and will catch up with you then … thanks so much for coming by, and especially so if you’ve had the time to make a comment, they make my day!  Anita 🙂