Cheryl is the host at One Layer Wednesday this week and has chosen ‘Pinterest Inspiration’ as the theme.  At CAS-ual Fridays, the theme is ‘Black and White Plus 1’ … my Plus 1 is green this time … and I’m submitting this as my second entry there.

I’m probably one of the very few who don’t have a Pinterest account yet, even though it’s tempting. I’ve heard, however, that after joining, a few individuals spend a looooong time there … and I know deep down that would be hazardous to my health, or at least my sleep patterns (such as they are).  So  I took as my inspiration a card by the awesomely talented and skilled Susan at Simplicity (who just happens to be one of the other hosts of OLW) … it’s here.  If there’s anyone in the universe who hasn’t visited Susan’s blog … GO … stop everything and GO NOW … you’ll know why when you’ve been and come back (eventually).  At least I hope you’ll be back!  This is my interpretation … 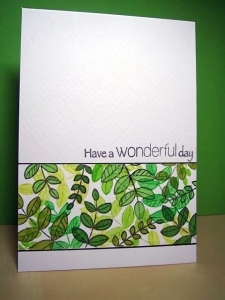 Susan used a technique called Masterboarding, where a collage sheet is created and cut up to make lots of cards.  As this is a one layer card, I couldn’t exactly do that and still meet the challenge, so instead I masked the card and used the same principle, using leaf stamps from Lawn Fawn.  The first layer was stamped and coloured with Promarkers.  For the second layer, I coloured the stamps with watercolour pens, stamped them over the top of the others and pulled the colour from the outlines with a waterbrush. The sentiment is from Kaisercraft.

I made a discovery about using Promarkers with masking … it doesn’t work … the ink bleeds under the masking tape, even if it’s well stuck down.   I was a tad piqued to find out after the card was almost finished … so I did a bit of rescuing and drew a black line top and bottom … ha, no more bleeding Promarkers!

That’s it for tonight … off to enjoy a short meander around the other entries before bed.  Thanks so much for coming by and for letting me know what you think, I really appreciate it.  Anita 🙂