Ardyth is the host at One Layer Wednesday this week, where there’s a colour theme … Green, White and Orange, the colours of the Irish flag, in honour of St Patrick’s Day.   Over at Less is More, there’s a ‘Frame It’ challenge, where there needs to be a frame of some sort on our designs … stamped, drawn, doodled, die cut, or whatever our imagination dictates!  Here’s  where my imagination took me … 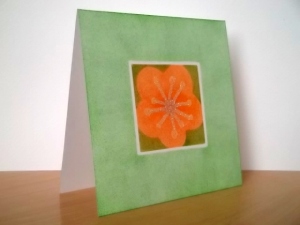 Yep, the urge to experiment and try a little spongeing again came upon me.  I cut a framed flower using Cricut Lyrical Letters … it’s a reasonably simple one, so it could be used as a mask.  I taped the (very narrow) frame edges of it to the card and then …

Voila … a one layer card with a frame.  After my last attempt at spongeing, I was prepared for this to take an age, but it didn’t … the most time consuming thing was clearing up inky fingers, sponges and ink mat afterwards!

Hope you’re having a Happy Sunday … thanks so much for coming by, your visits and comments really do mean a lot!  Anita 🙂