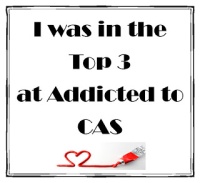 There’s a brace of ‘Get Well Soon’ challenges this week … it’s the theme chosen by Chrissie and Jen for our one layer card at Less is More … and it’s also been picked by the lovely Sandie over at Addicted to CAS.  Oh good … a bit of challenge doubling.  But wait … it just so happens that I used Paper Smooches stamps for my card, and as the Paper Smooches Sparks challenge this week is a Cool Shades one, my colours are their colours … purple, teal, lime green and grey.  Challenge trebling then … 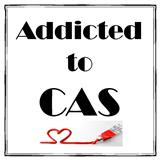 ETA:  I forgot .. Simon Says Stamp Wednesday Challenge is asking us to use something from the store this week to celebrate STAMPtember … I used Paper Smooches Healthy Vibes, so am submitting there too … quadrupling!

I love this little creature as it’s able to morph into different things … a while ago it made an appearance as an extraterrestrial (here) … this time it’s a germ … not sure what it might turn into next time.  Wish I was as versatile (in a non-germ way of course).

As well as taking the starring role during this performance, this little ‘thing’ had a walk-on part … as a mask, so I could get it’s buddies to float about in a crowd-like manner across the card.  Once the crowd got themselves settled, they were coloured with Promarkers, although for the extraverts among them that wasn’t enough.  The lime green ones insisted on hogging the limelight (naturally), so are sporting doodled spotty numbers instead of plain outfits.   They all have stickles added to their head-blobs (I was going to say antennae, but don’t know if germs have them … head-blobs seemed more appropriate) and the ‘feel better soon’ part of the sentiment nestles cosily between the tail-blobs of the final four.

Before I move on, has anyone read ‘A Million Chameleons’ by James Young … either themselves or to sons/daughters/nieces/nephews/grandchildren?  It’s the one that starts ‘a little chameleon all in vermilion,  danced alone in a garden pavilion’.  If you have (and it’s not toooo long ago), don’t these germs remind you of the illustrations of the chameleons?  If you haven’t, and you have little people to read to, try it … it’s charming and delighful.  I read it to my niece a million times when she was between two and four years old … it was high on her favorites list (and mine because we had so much fun together with it!).

Now … some exciting news.  Yesterday, my whelms were very definitely overed when I found I’d made it onto the ATCAS Wall of Fame … to be in the company of so many talented and inspiring card-makers … wow … I mean WOW!  Thank you so much Kylie, and the rest of the DT for such an honour … and for such a fun challenge … your hard work, creativity and enthusiasm is so appreciated 🙂

I’m looking forward to a browse round blogland a little later, to see who’s been inspired to do what, so may see you there.  In the meantime, thanks so much for coming by, your visits and comments are always a delight!  Anita 🙂