I’m not sure quite what happened this week … not a single card’s been made since Sunday.  What???  So, the plan is to remedy that over the next couple of days … starting with this … 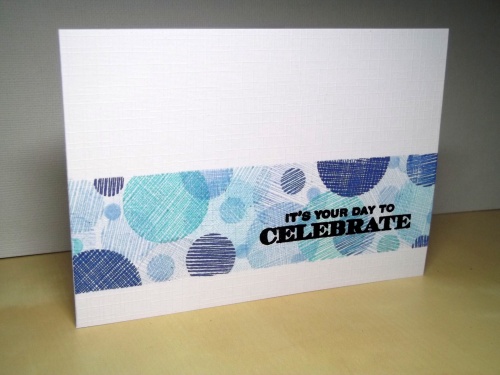 Squeaking in before the door closes shortly at Less is More, where we have a ‘Winter Blues’ theme, and combining that with CASology‘s Cue Card ‘Bubbly’ (isn’t that such a fantastic word?).  As this is a one layer card, I’m also joining in at Susan’s newly revamped, restyled, re-magnificent One Layer Simplicity (used to be One Layer Wednesday, but it’s had a facelift and now has it’s very own blog), and finally, I’m linking up to Simon Says Stamp Monday‘s ‘Blue’ themed week.

This card took a while.  I had a lot of practice runs on scrap paper to come up with it.  Why, you may be asking yourself (and anyone else in earshot if you’ve said it out loud in stunned surprise) … yep, it’s a simple layout, it’s a simple monochrome palette, it’s simple stamping.  I told myself that as I carefully worked it all out … however, simple it was not, I have no idea why.  Now, though, I’m happy … I like it … a lot.  I can’t explain it, it’s just really pleasing to look at … and it captures the bubbly look I wanted (at least IRL) … kind of flowing over the edges of the bath bubbly.

The bubbles are from Papertrey … I stamped them randomly in five different colour blues after masking the card base.  The sentiment’s from Hero Arts, embossed in black (with copious amounts of dust buddy tapped on beforehand).  What can I say, I have black embossing powder, I know it was a mistake, but it needs using, even though it’s a b****r not to get specks everywhere.  I’m thinking this’ll be a birthday card … the same HA set has a great sentiment that will go on the inside … and it has bubbles on it (well, circles really a bit like lights round a mirror in a star’s dressing room).

I’m off to wander round to see what everyone else has been inspired to create.  Thanks so much for coming by … as ever, your visits and comments are a joy!  Anita 🙂